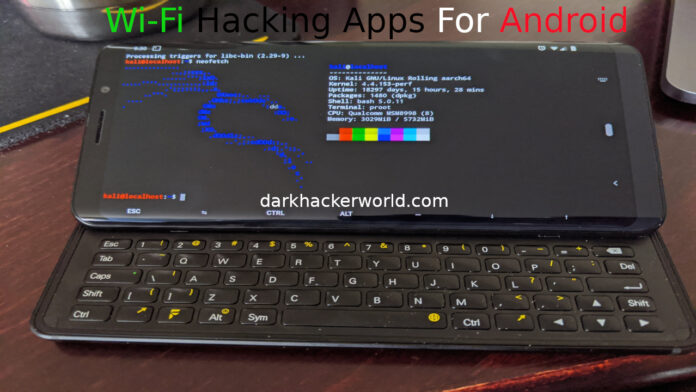 The usage of the internet is increasing rapidly. In this world of technology, If you want to need information about something, You have to use the internet. The study shows that over 4.32 billion people accessed the internet via their devices. Most people use WiFi to connect themselves to the internet.

Kali Linux NetHunter is a free open source penetration testing platform available for Android devices. It is based on the popular distro Kali Linux. You can install it on both rooted and non-rooted devices. Through this platform, you can penetrate servers, Wi-Fi, websites, web app, and more.

It contains an app store from where you can download apps to hack a wifi network. NetHunter comes with several tools that convert your Android into a hacking machine. This platform is used by numerous experienced penetration testers and security professionals. It supports a wide range of Android devices.

zANTI is an advanced penetration testing toolkit available for Android devices. It allows you to detect vulnerabilities in a Wi-Fi network. With the help of zANTI, you will be able to perform various types of operations such as MITM attacks, MAC address spoofing, scanning, password auditing, vulnerability checks, and more.

The app is easy to use and requires a rooted Android device to run. Its Wi-Fi scanner scans and shows you up available Wi-Fi networks. Hackable Wi-Fi displayed in green color. This app lets you hack someone’s Wi-Fi password using the built-in tools that it provides you.

Aircrack-ng is an entire set of tools to assess the security of the Wi-Fi network. Before, Aircrack-ng was only available for Linux, But now it is available for all major platforms, including Android. In terms of WiFi security, it is one of the best Wi-Fi hacking apps for Android.

Aircrack-ng is an 802.11 WEP and WPA-PSK keys cracking program that can recover keys once enough data packets have been captured. Once it captures all the necessary packets, you will be able to connect to a password-protected Wi-Fi network.

You can connect to a vulnerable Wi-Fi through a PIN but cannot see the password without root permissions. PINs are calculated with the help of several algorithms. Additionally, other PINs are already included in their local database.

NetCut is software that enables you to turn off the internet connection of any device that is connected to a LAN. NetCut requires a rooted android device to run. It will not run on on-rooted devices.

It also lets you detect the attacker. You will be able to see who is attacking you from NetCut. Moreover, you can turn the attacker offline right away from the NetCut.

So there are some best Wi-Fi hacking apps for Android. These apps allow you to detect vulnerabilities of your Wi-Fi network. Cybersecurity professionals use these apps to perform penetration testing on Wi-Fi to protect and secure it before getting hacked by black hat hackers.

REXRADAR is your technology, Programming, tech reviews website. We provide you with the latest tech news and articles straight from the leading tech industry.